“Materia” is not merely a term which alludes to the realistic essence of the subjects depicted in my paintings, but it is primarily my whole artistic vision to capture all the time and past events that brought a particular subject to be what it is today. “Materia” is also my pursuit to give importance, dignity, and if possible life, to what in theory should be a otherwise irrelevant, inanimate, and therefore ageless, subject.

The subjects that over the years I found more satisfactory to fulfill this research while nourishing my personal sensibility are unpretentious subjects details, such as limited portions of a masonry ruin, a rough as well as a smooth stone surface, a worn wooden material, a rusty metallic object, and any other detail which shows his history (his age) through the ravages of time.

The realism of my paintings is mostly a consequence of my extreme effort to carefully reproduce all the abundant signs that have been left over the years on these subjects surfaces. These signs represent a sort of DNA from which I gather the illusion to further enhance the subject identity as well as to witness the events that the particular subject has experienced during its “life”.

The alternation of light and shadow, with the latter either dancing upon the subjects surfaces or simply defining straight lines, is when possible my way to enrich the subject character, to add more three-dimensionality to the image, and gives me the illusion to give life and soul to the whole canvas. 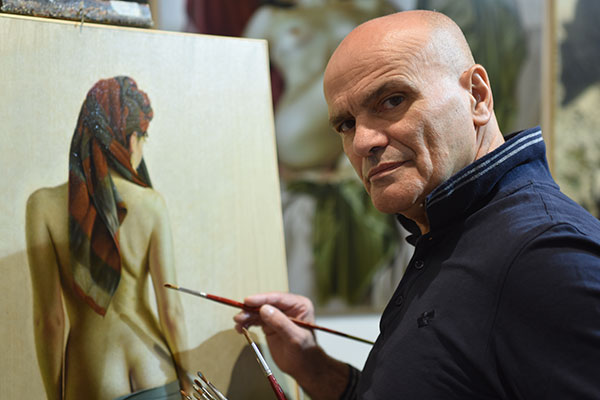 Sandro Bastioli was born in Spoleto in 1949. He went to live in Switzlerland at an early age, where he soon showed a skill for drawing and painting. When he returned to Italy he went to live in Milan, where he attended the Accademia di Pittura di Bovisio Masciago for two years, under the guidance of Professor Cino Balleri,Here, he improved his tecnique in oil painting. He began his artistic career after overcoming many milestones, and he ventured into painting “nude women” as a start. He painted them both in oil and sanguine, which he preferred. Then, he started painting Umbrian “landscapes” in meticulous detail, to go onto “still – life” in Caravaggio style. Here he began to make a name for himself. In 1977 he exhibited his first paintings during the “Festival of Two Worlds” in Spoleto. He then had a personal exhibition in the Town Hall in Milan. Later, he exhibited in “La Piccola Gallery” in Turin. In October 1980 his work was shown in the “SK Gallery” in Galatina, Lecce, where he won “Premio Martinez”. Then he exhibited in Gabicce, Pesaro, and in Gualdo Tadino’s Town Hall Gallery.
Later he was invited to show his work in Rieti by the Associazione Arti Figurative in the “Sala d’Arte 52”. In 1988 he exhibited together with another 24 artists during the August Holidays festivities in Spoleto. A year later, he exhibited in a Religious works of art collection in Chiostro di San Nicolò in Spoleto. In the same year, he designed the poster for a Regional meeting in Spoleto about Micology.

During the period beginning at the end of 1989 and in 1990, Sandro Bastioli’s painting reached a decisive turning – point. The element “Stone” began to dominate his work. He transferred from “Still-life” to “Stone” and smooth pebbles, to the orderly composition of slabs of marble and travertines.

The light and shade effects created by the artist renders these paintings just as beautiful as his previous “Still-life”.

Little by little, settings of marble columns and antique walls re-echoe classic beauty and, a human element, replaces a material one. His nudes become stone statues or fragments of them, which eventually disappear altogether.

The evolution of this original artistic idea reaches an essential unique style, which aims at the details as a launching base for a mitigated hyper realism, but with a touch of classic sensitivity always present. 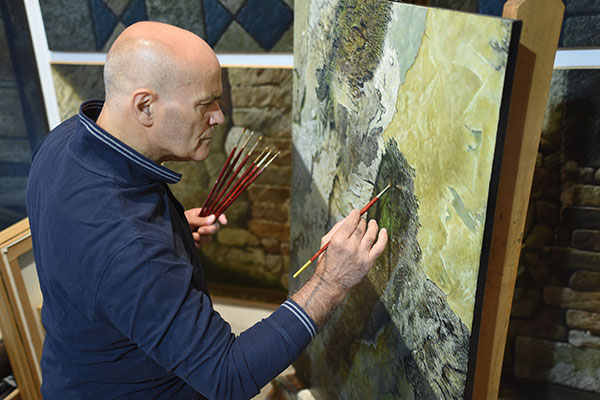 He participated at “Week of Umbrians in Rome” in 1990, where he was awarded a medal and in the same year in the month of August, he took part in the 3rd edition of the “Festival of Art and Culture” in Montereale in Abruzzo. Then he took part in an exhibition of Painting, Graphic Art and Sculpture organized by Spoleto Tourist Board in Spoleto, where he was awarded “the best artist” prize by the jury.

In 1993 he exhibited one of his works at a show called “De Nativitate” presented by Spoleto’s Tourist Board. He has also presented his paintings in Vigevano in the “S. Bartolomeo” Gallery, in “Palazzo Maioli” in Città Ducale. He also exhibited in the 1st edition of “Miart” in Milan, and in 1994 at “Arte Fiera ’94” in Padova.

Then in 1997 he took part in an international exhibition “1st rassegna d’arte internazionale” in Militello in Messina.

In 2000, from 28th September to 14th October, he exhibited his paintings in New York at the “MaMa Gallery” in East Village. Ellen Stewart, the founder of a revolutionary cultural movement called “Off-Off”, promoted his works together with the “Italian Institute of Culture” in New York.

After various other investments in solo and group exhibitions, in 2008 the works of Sandro Bastioli are chosen by the town of Schwetzingen, Germany, to be exhibited at a solo exhibition from May 2 to June 27, evocatively titled “The Spoleto Stones.”

Between the end of January and in February 2009 he exhibited his works, at the invitation of the City of Marsciano (Pg) in a solo exhibition at the charming frescoed rooms of the Dynamic Museum of Brick and Terracotta.

In March 2009, painted by Sandro Bastioli are present in Oslo Tonne Gallery for a solo exhibition he held 21 to 5 April 2009.

In October 2010 he exhibited in a solo show at the 40th Exhibition of Contemporary Art “King of Rome” in Rome as guest of honor.

In May 2015 Sandro Bastioli exhibited his works at Eggi (Spoleto) at the invitation of the Pro – Loco “Eggi Friends” which won the prestigious prize “Alberto Talegalli”.

Also in 2015 he took part in a group exhibition organized under the patronage of the Municipality of Spoleto by the Cultural Association “West” at the Town Hall Leonetti Luparini.

From the November 7, 2015 until May 22, 2016 shall be present with a selection of works at the Museum of Modern Art in Spoleto “Palazzo Collicola” for the exhibition “Contemporary Spoleto” organized by the Artistic Director Gianluca Martiani, for which he won the cover the online issue of the “Artribune” magazine.

Sandro Bastioli lives in Spoleto and has a small studio in 13 Via Fontesecca, in the old centre of Spoleto.